January 29th, 2018, one of those days where the market is this rusty wheel, struggling to function.

Many hyped coins are turning red, while others are still looking to set foot on a less volatile trend. It doesn’t take a Sherlock Holmes to unravel the mystery: it’s FUD, it’s regulators wrath, it’s human emotions taking over. And it’s nothing short of a windy day for daily-traders, surfing for profit.

Let’s start with some news.

The Japanese cryptocurrency exchange Coincheck is coming under government scrutiny after hackers stole $530 million from its users. While the exchange has promised to partially refund the 260,000 cryptocurrency investors affected, it didn’t specify when, or how exactly it intends to do so. Needless to say, the occurrence spread a large anti-crypto campaign on mainstream financial media outlets, retaliating their “sass” on the “Bitcoin bubble”, the “deregulated wild west” and so on. This actually is a real test ahead of crypto-exchanges, and their ability to deal with some very unhappy customers.

For crypto enthusiasts, beginners and daily-traders alike, Weiss just released an independent rating for most serious crypto projects (from A to E with A being excellent, and E being run, Forrest, run). The listing didn’t appeal to Bitcoin fanatics. The project has got a C, while Ethereum, initially a Bitcoin fork, got a B. It’s like copying someone’s homework, and getting a better grade! Worth mentioning that the rating is based on a number of metrics, like risk, technological innovation, and other fundamentals.

Less gruesome news from Japan after the Coincheck hack: Yamada Denki, one of the largest consumer electronics retailer chains in the Land of the Raising Sun has partnered with cryptocurrency exchange bitFlyer to add a bitcoin payments service in two of its stores. This is believed to boost cryptocurrency liquidity, and pave the way towards a larger adoption. Adding up to tens of online retailers, fast-food chains, travel agencies and financing systems providers -to name a few, cryptocurrencies as a mean of value-transfer is knocking on mainstream doors!

Exploring the top winners and losers, it’s fair to say that the market has seen better days. Total Market Cap stands at US$ 750 Billion. Total 24th volume at US$22 Billion. Blocknet, Dent, Gas, Iconomi and Nebulas have been the biggest winners so far. But the top 10 list extends to include higher profile coins like Ripple, Komodo, and the Chinese Ethereum, a.k.a NEO. It’s not one of those “green” days for crypto, it’s just a #HODL day like most people say!
Going Down! 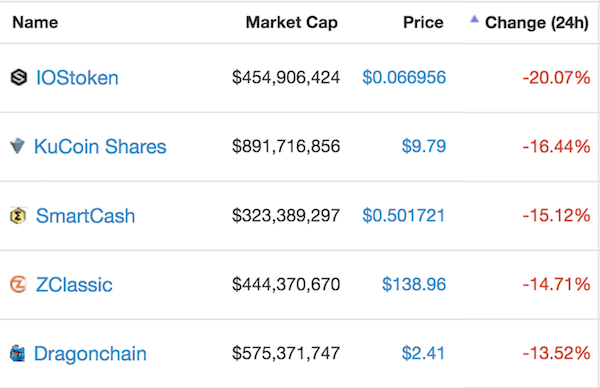 Many cryptocurrencies are observing severe price pullbacks, aligning with the FUD charged atmosphere of the market. Amidst regulatory hammers and tightening rules on ICOs, 8 of the top 10 cryptos are losing ground as of today, including ETH, BTC, LTC, and ADA. Tough day indeed.
TOP#5 in terms of 24th Volume 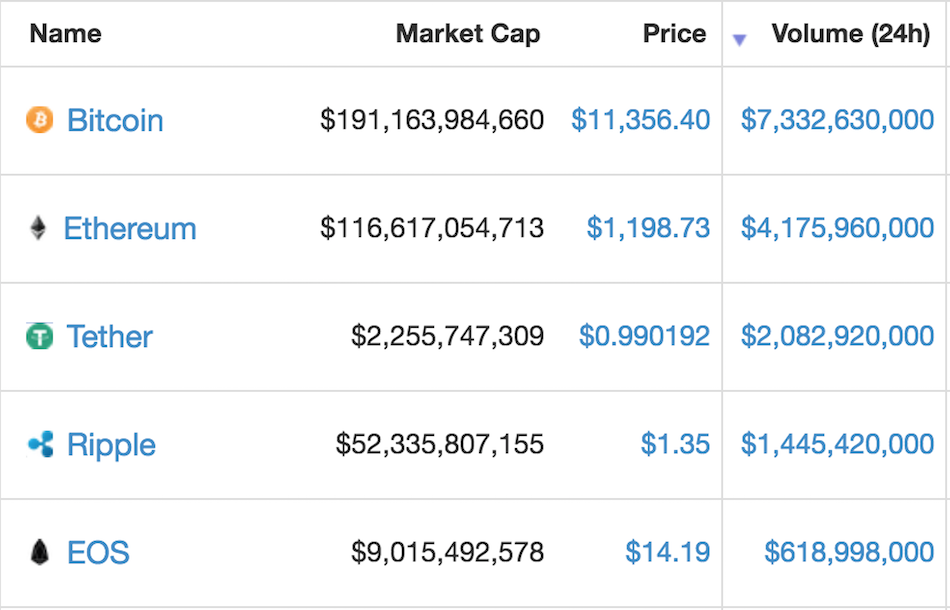 In terms of 24th volume, Bitcoin continues to lead the market with a US$7.33 Billion, down from an 8 Billion+ average last week. Ether is solid in his Silver-spot, achieving US$4.1 Billion, up from a US$3 Billion value realized around the same period last week. Note the presence of EOS in the top 5, a great project to follow.
And … TOP#5 in terms of Marketcap 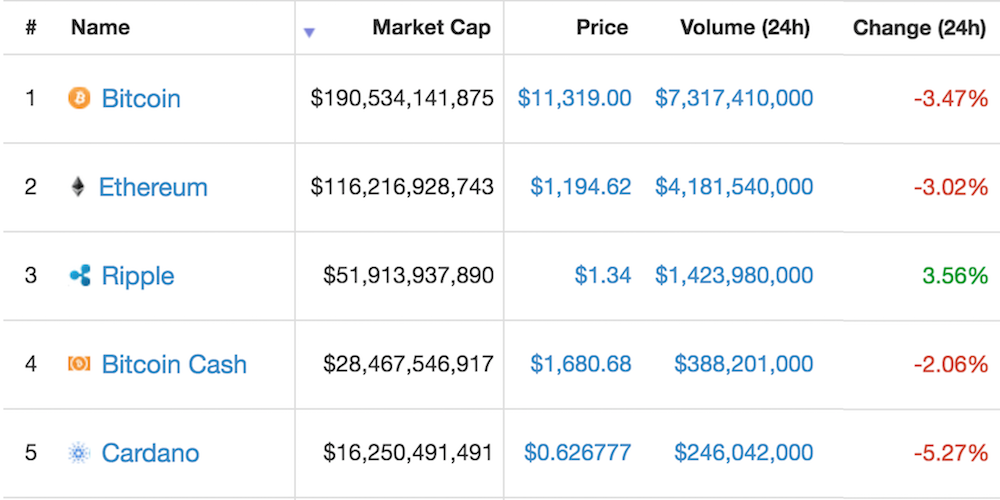 No big updates in the top #5 coins by market capitalization. But in the top #10, things are getting interesting: IOTA is out of the top ten. NEO is ranked #7 with eyes on top #5. And EOS is steadily creeping up towards establishing itself as a high profile currency.

BTC prices broke through US$11,200, where it’s trying hard to set a new resistance level and build what looks like a recovery uptrend. Fibonacci retracement levels seem to highlight a pullback, most likely time for bulls to get ready for the next run, likely a short one (considering the US$ 10,000 as a baseline). Is there enough steam to push prices back up considerably? It doesn’t look like it for now. The Bears are ferocious, and the Bulls are looking pretty exhausted. So far, traders are mitigating their losses, and waiting for solid updates from developers and key community players – as well as regulators. I personally am staying out of Bitcoin, until knowing more about the Lightning Network. But that’s just me, I guess.

Currently trading at around US$1200, after a great bullish run over the past 24 hours. ETH is gradually recovering from the recent price punishment, that made it lose 50% of its value in a matter of days. Depending on how prices will evolve overnight, we’ll have a better understanding of the market sensations. I am personally keeping my coins warm for now. Will ETH prices achieve US$ 1400 again soon? Hard to speculate, but graphically, it’s certainly possible within a few weeks.

E-commerce landscape: a future tied to technology and cryptocurrencies